Get to Know: James Pate, ACF Las Vegas Chef of the Year 2020 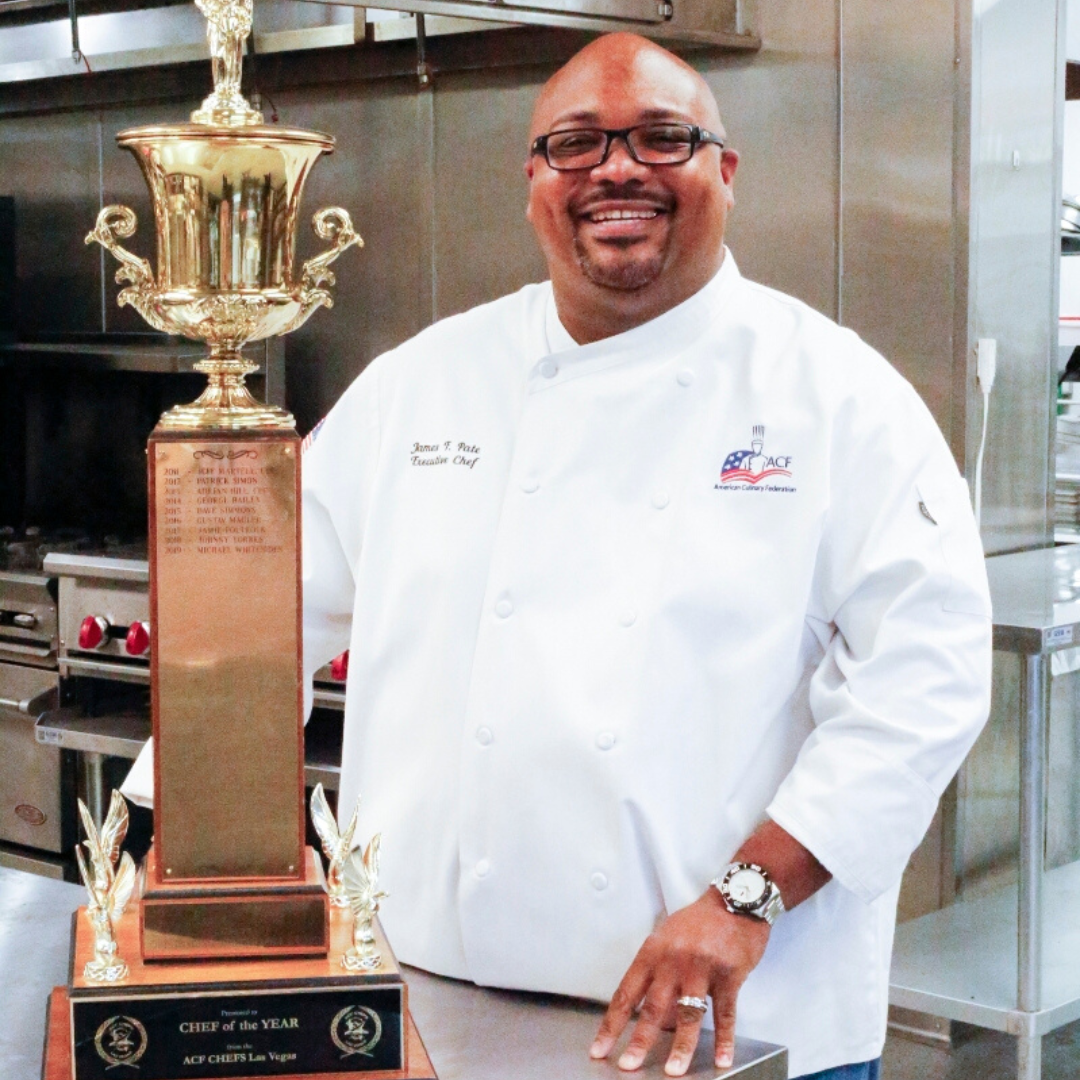 James Pate is a life-long culinarian with deep roots in the Las Vegas community. He knew from an early age he wanted to be a culinarian and chose to attend a vocational high school, Southern Nevada Vocational Technical Center (VO-TECH), to get an early start in his culinary career. After graduating with honors, he attended CSN and ultimately UNLV where he earned an Associate’s Degree in Culinary Management of the Arts.

He got his first professional taste in the culinary world working as a lead cook at The Rio All-Suite Hotel & Casino. From there, he went to popular locals casino chain, Station Casinos, where he was awarded the youngest sous chef at the time, while opening three new properties: Texas Station, Sunset Station, and Kansas City Station.

His culinary journey would then take him to The Strip where he served as an Assistant Room Chef/Executive Chef at the California Pizza Kitchen inside the Mirage Las Vegas for 14 years. After a brief one-year stint as Production Chef at Treasure Island, he was recruited to lead the culinary team at SpringHill Suites by Marriott Las Vegas Convention Center by serving as Executive Chef for six years.

Believing he had learned all that he could on the cooking-side of the culinary world, earlier this year Pate took on a new challenge. He now serves as a Business Development Representative for Preferred Marketing Group, which sells industrial manufactured kitchen equipment.

“I wanted to challenge myself to experience the other side of cooking, the side people don’t really think about,” says Pate. “In the kitchen, your equipment is everything. You need to think about the functionality, durability, and ability to keep up with the latest trends in cooking.”

As the official representative for Las Vegas, he uses his 30+ years experience, coupled with newfound knowledge of up and coming kitchen equipment, to educate local chefs on the latest trends and how to make kitchen equipment work for them.

Six years ago Chefs Jamie Poltrock, Angela Armstong, and Patrick Simon all recognized Pate’s passion for the industry and giving back to the community. They recruited him to join ACF Las Vegas, an invitation he gladly accepted. He quickly became an integral member of the organization, enthusiastically supporting the organization in its efforts to educate and mentor young culinarians while supporting the Las Vegas community at Large. He has worked countless times alongside other chefs to help feed those in need in our community through the Chefs for Kids Holiday Helpings and Cookin’ Up Breakfast programs.

But, it was his work during the COVID-19 shutdown that would solidify his most coveted position as 2020 Chef of the Year. Pate, along with a few other chefs in ACF and the community, banded together to form Chefs4Vegas to provide food assistance to families in need during the pandemic. In all, he helped provide food to more than 85,000 families in less than three months. Chefs4Vegas’ work was honored with a proclamation from Commissioner Tick Segerblom and The Mayor of The City of Las Vegas.

Chef of the Year is a prestigious honor which he actively sought after, is extremely proud to have achieved, and grateful for receiving. He encourages others to do the same.

“The Chef of the Year award is not a bragging tool, it’s an accomplishment, because I overcame a hurdle,” Pate furthers. “And the award isn’t just something you receive and add to your resume, there’s some work that goes into it after the ceremony.”

The Chef of the Year duties involve setting up monthly meetings by securing the location, all the vendors, scheduling the meals provided, and being hands-on to organize everything; taking the pressure off of the president.

The Chef of the Year also plays an important role in representing the chapter to the community at large.

“You’re upholding a name that has been in circulation for more than 50 years. You can’t get in trouble, you have to give back, and you have to be a face for the organization,” Pate furthers.

All of the work is worth it though, as Pate considers this award to be one of his greatest accomplishments. He encourages anyone who is interested in becoming Chef of the Year to “Never give up on your dreams and go after it.”